Lizard Chapter 18: LEARNING TO CARE and GETTING TO KNOW LIZARD


Each day was the same, he'd get puffed up and alert. Each night was the same: long nights of not moving at all. Lots of times she couldn't tell if he was alive or not because he didn't move at all. She couldn't see him breathing. 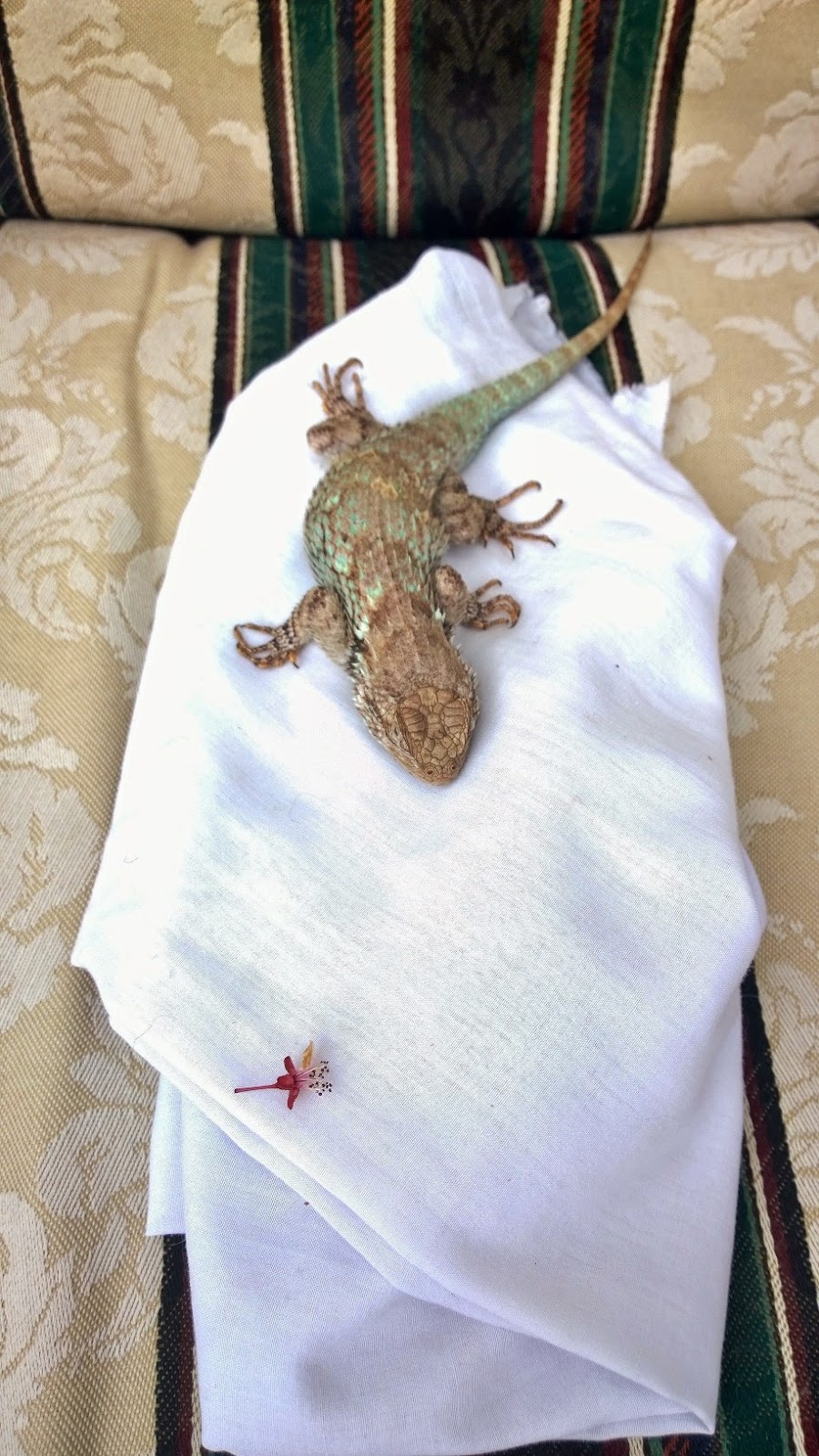 Each night she prepared for his death, but the next day would come again, same thing. Monday. Tuesday. Wednesday he positioned himself on the side of the footstool by her chair and stayed there.  From just past noon straight through the evening.  He never moved a muscle. 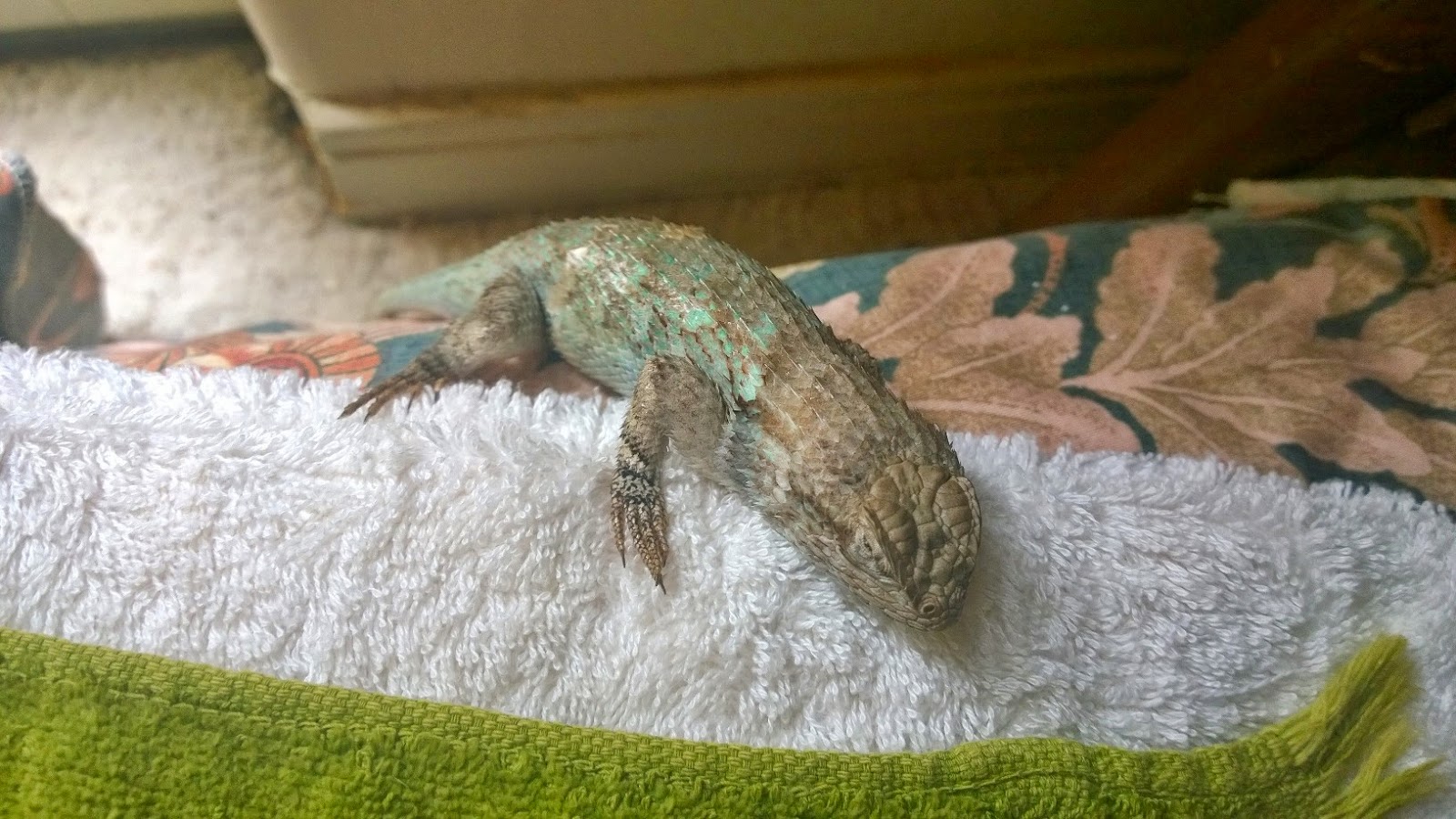 She put him on soft pretty fabrics to keep him comfortable, but lizards are not like people. They only get their claws caught in the fine strands of the fabric and then they are prisoners of the fabric until someone comes to let them go. So that wasn't working too well. 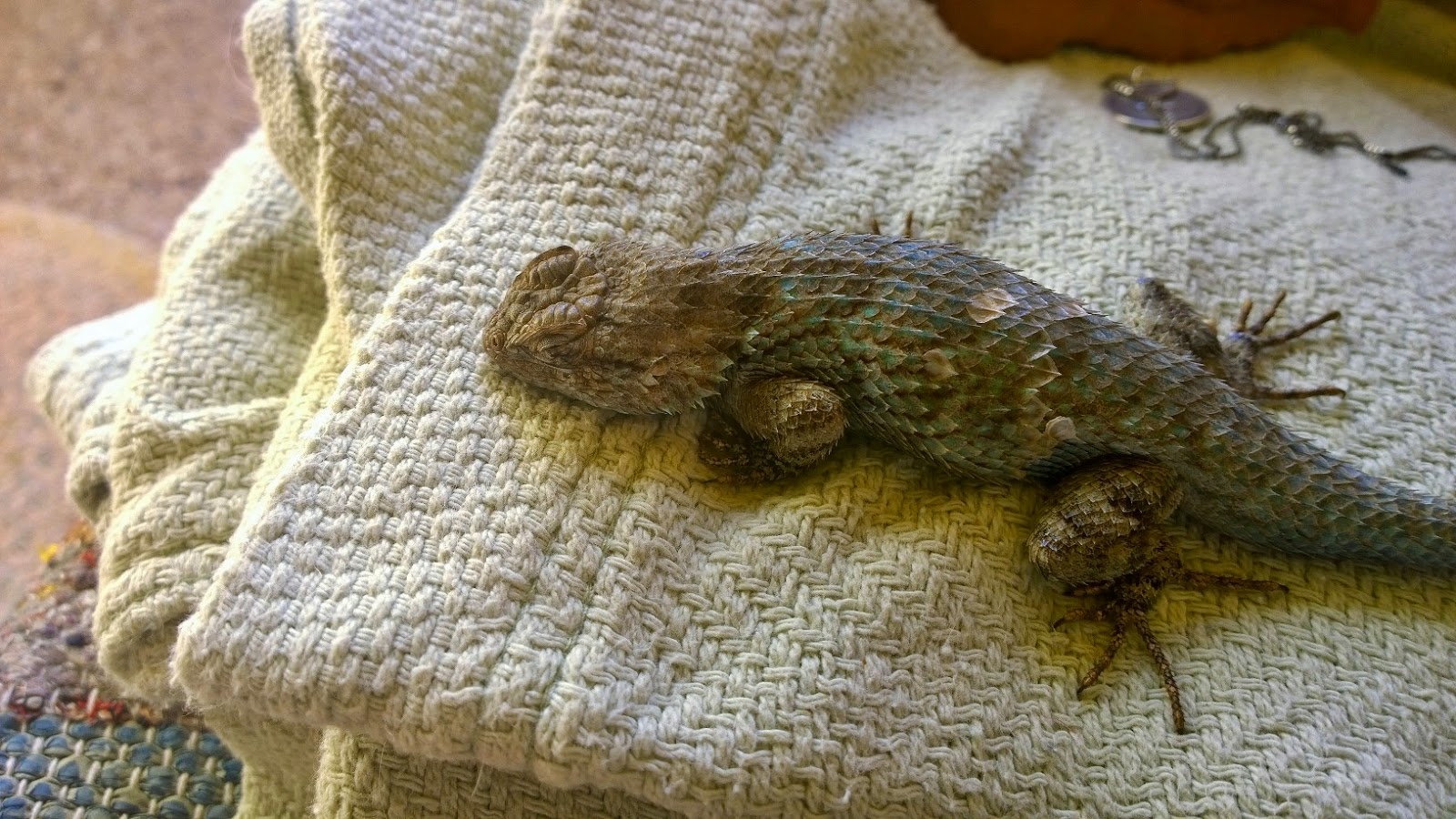 She felt kind of bad that she hadn't bought a heatlamp for him so she started microwaving a thing full of beans that would stay warm for a long time. She would heat it up and then lay him on top of it after it was just warm to the touch. Still, every night, he looked just like death. 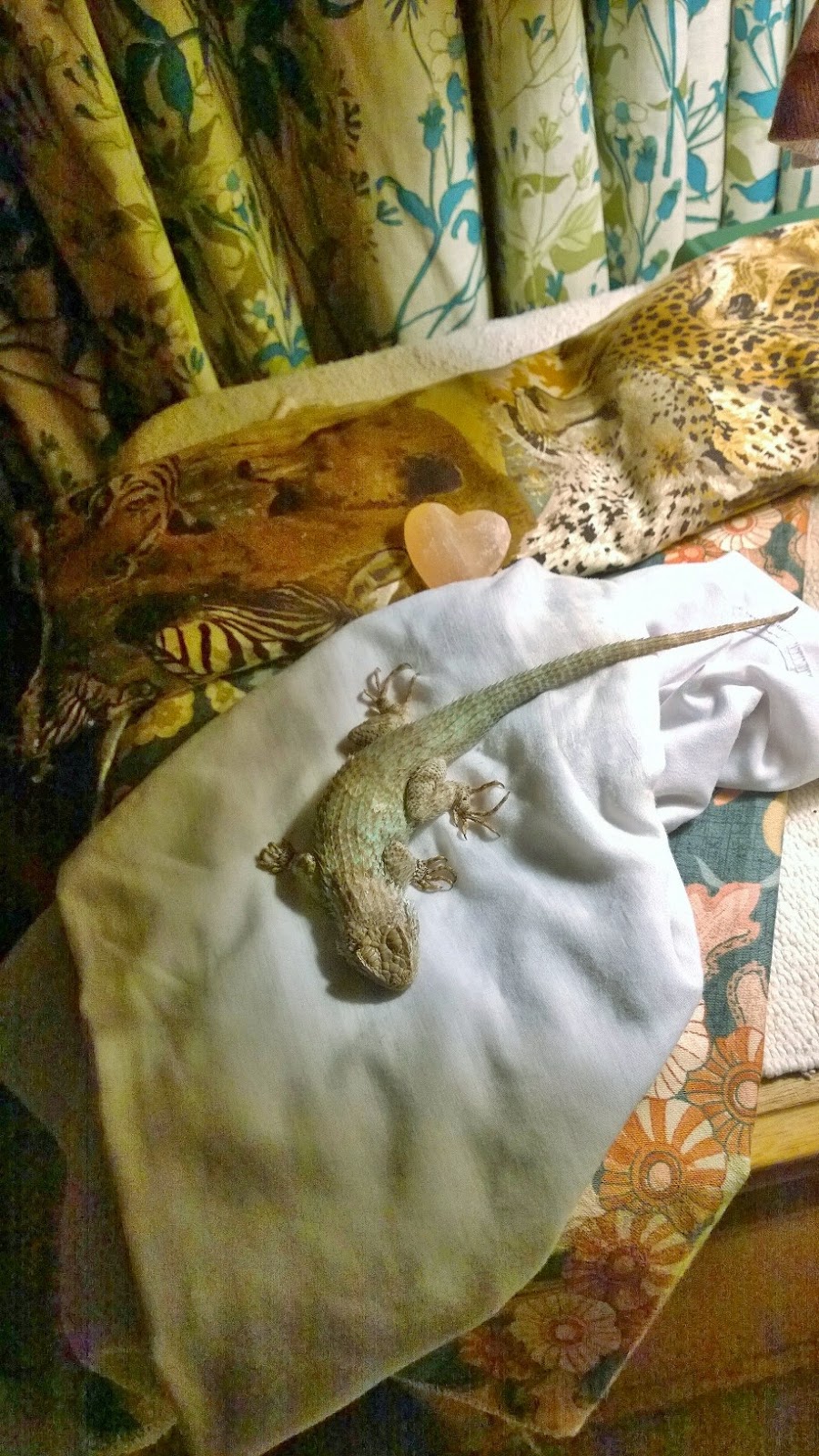 Every night she sang him "Amazing Grace" and stressed the part about 'I once was blind but now I see".  As soon as she started singing, he would start breathing really deeply and she could see his lungs go in and out. He would seem dead until she began to sing and then he would be very much alive. I think he was responding to her voice, I'm not sure what that was all about.

In the mornings she would take him outside and after about an hour he'd start Coming To. The day came when he would start moving his head back and forth, like a compass, when she moved him. Then he started opening his one good eye. He would open it long enough to look at her and to see where she was taking him; to see that she was there, and then he would close it again.

"What is it that you want?" she asked him while he sat there motionless.
"Did you come to me for help?"
"Did you come here to die?"  She got no answer.
"Is there something you want me to do for you?"
She sat with him very quietly, almost as still as he was.
Yes. Yes he said. There is something I want you to do for me.
"Just tell me what you want and I will do it for you." 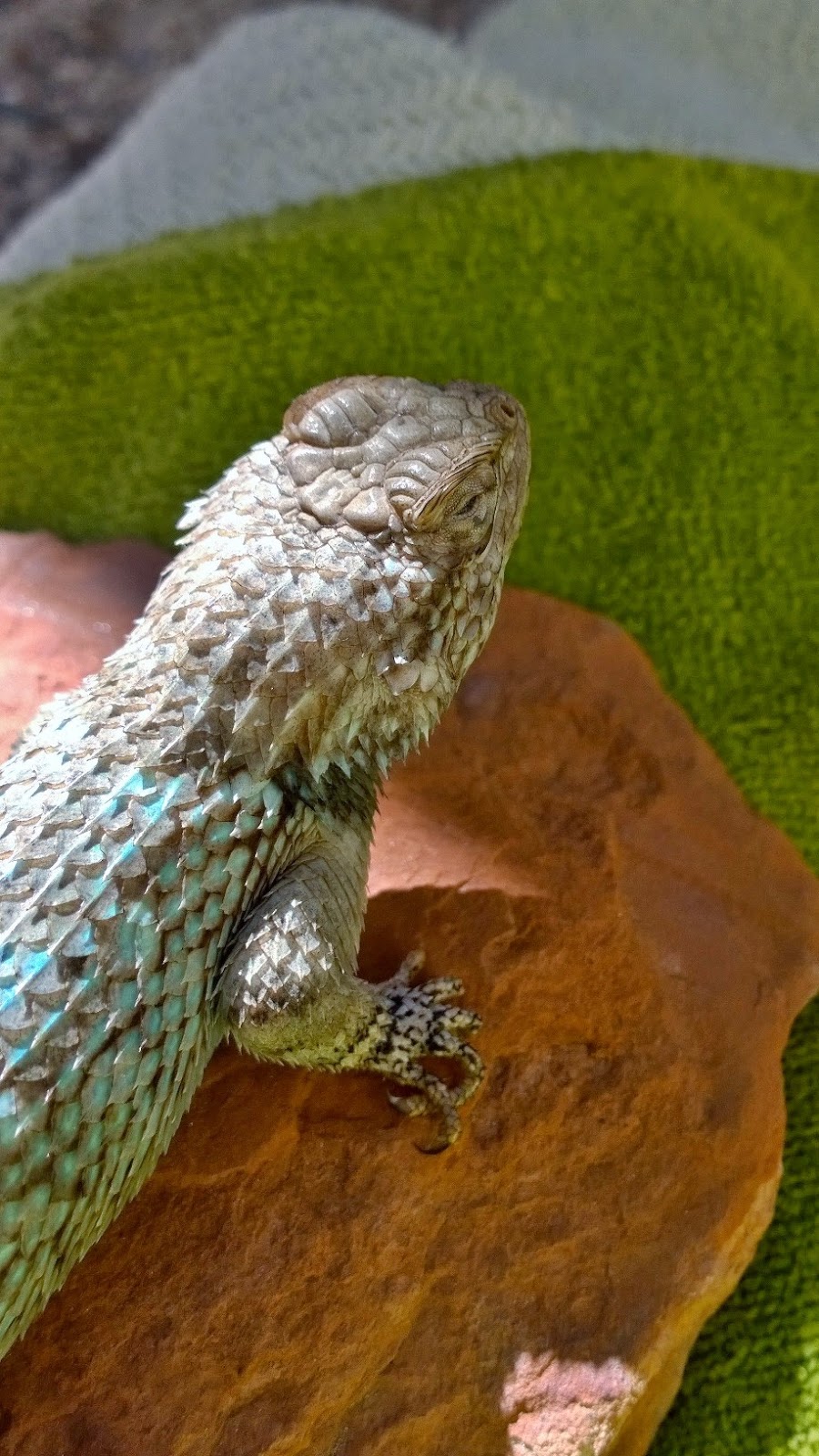