She'd put him outside in the morning in the sun to charge him up. 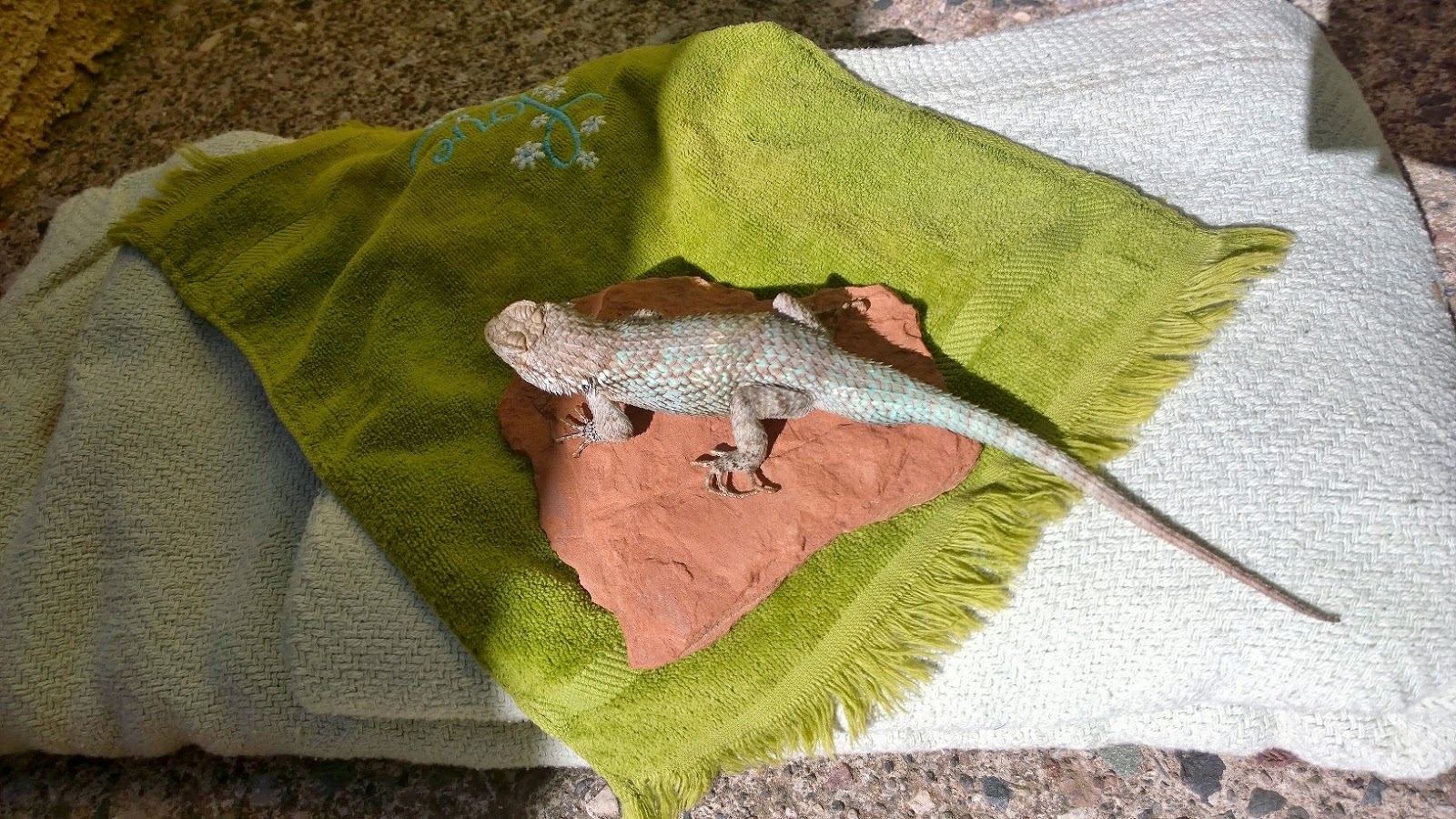 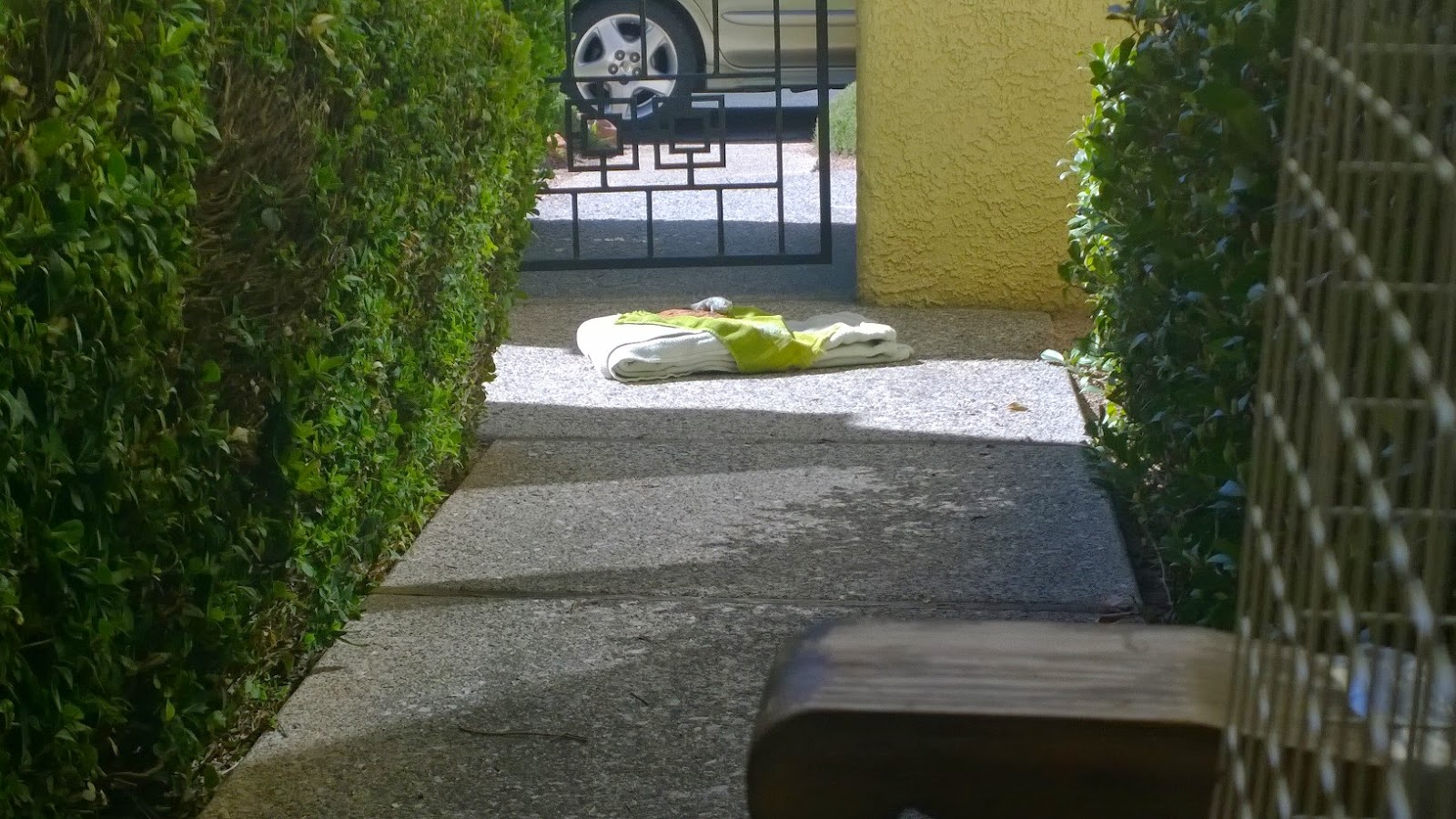 But the birds kept coming around and she was afraid they would eat him.  So she found a laundry basket and put him under that to protect him. 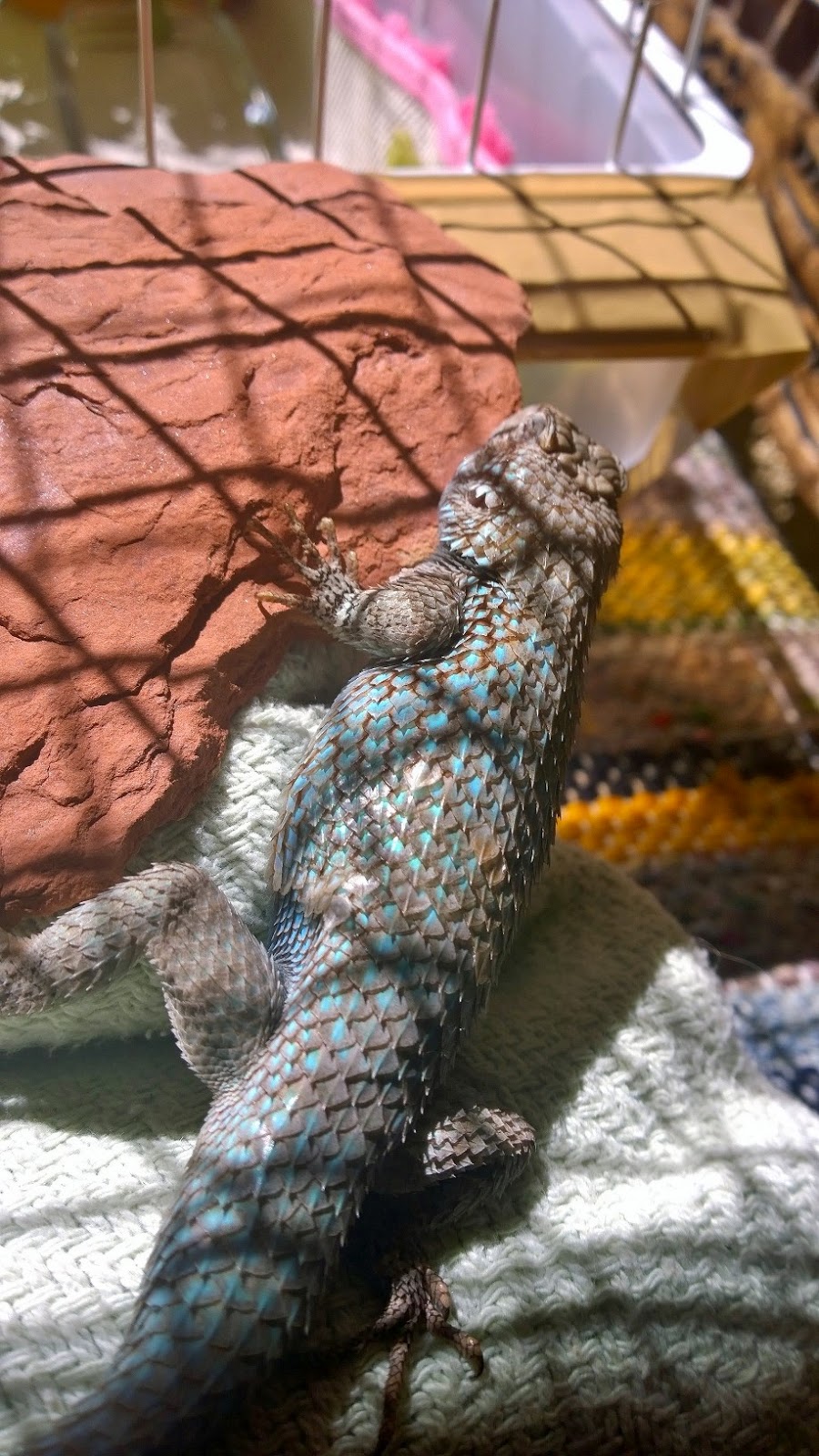 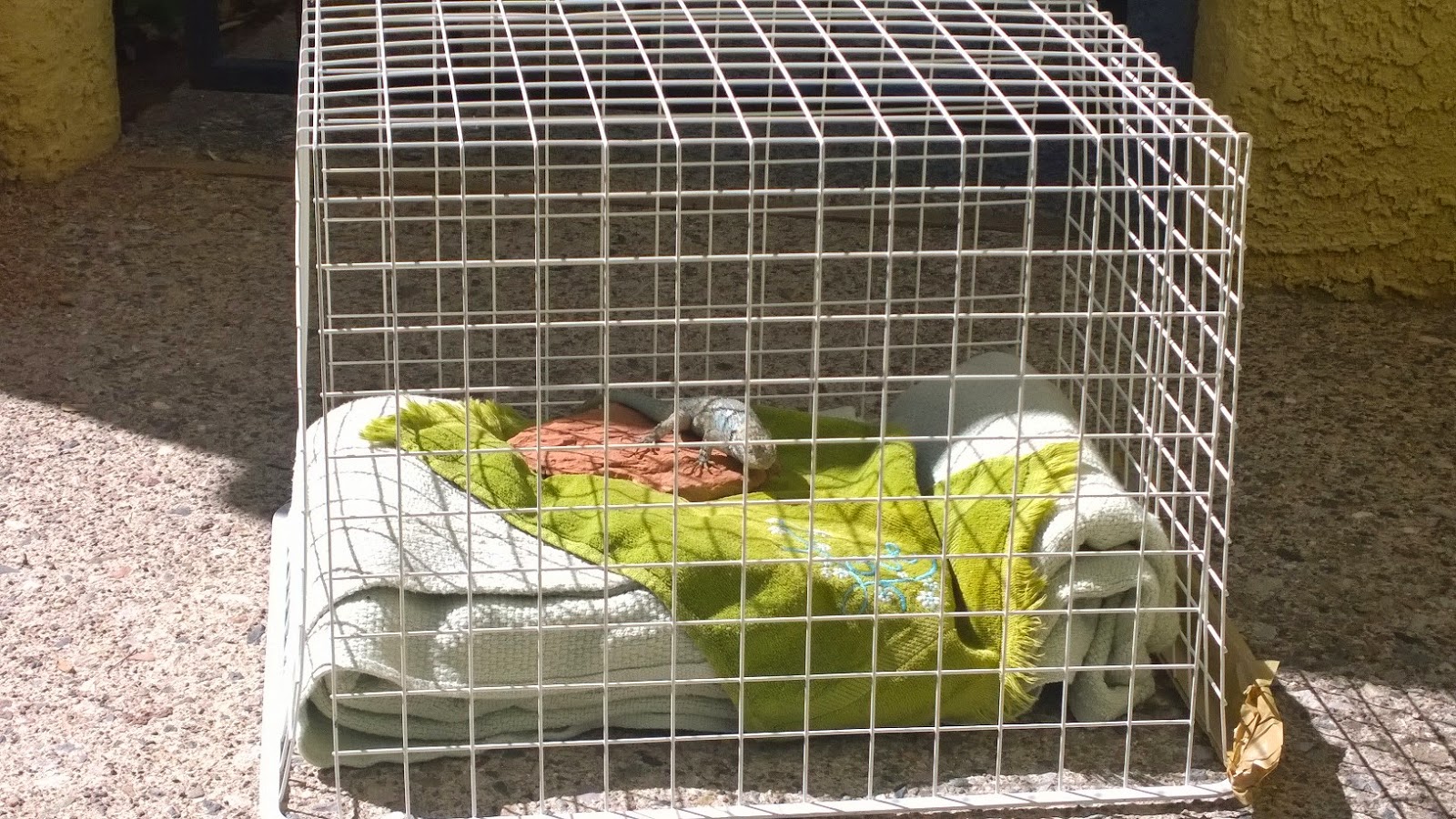 ...But the moment she walked into the house he got right out. 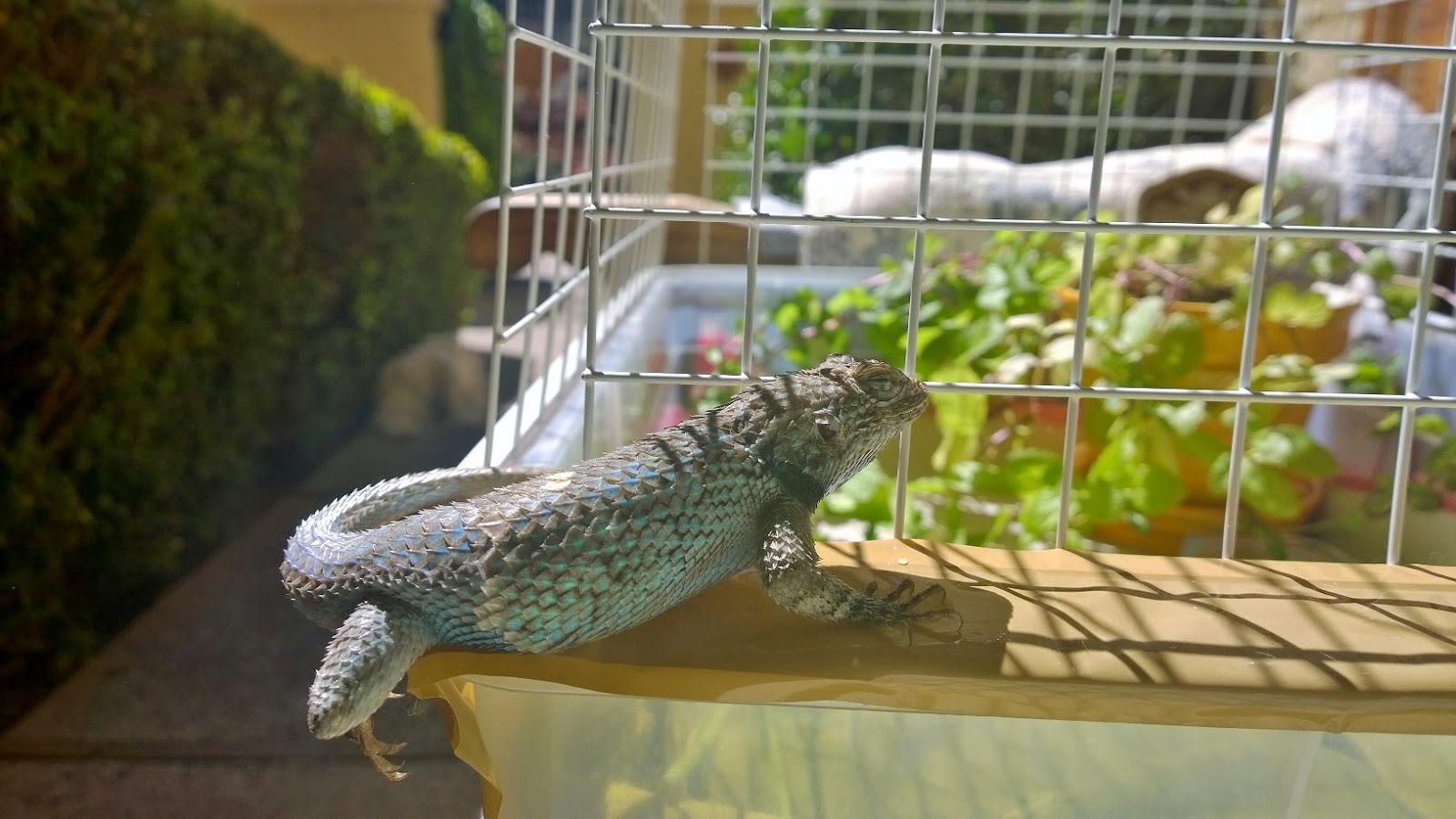 So she figured he could get back in if he needed to. She set his favorite red rock outside the basket and he sunned himself on that in the shadow of the basket. 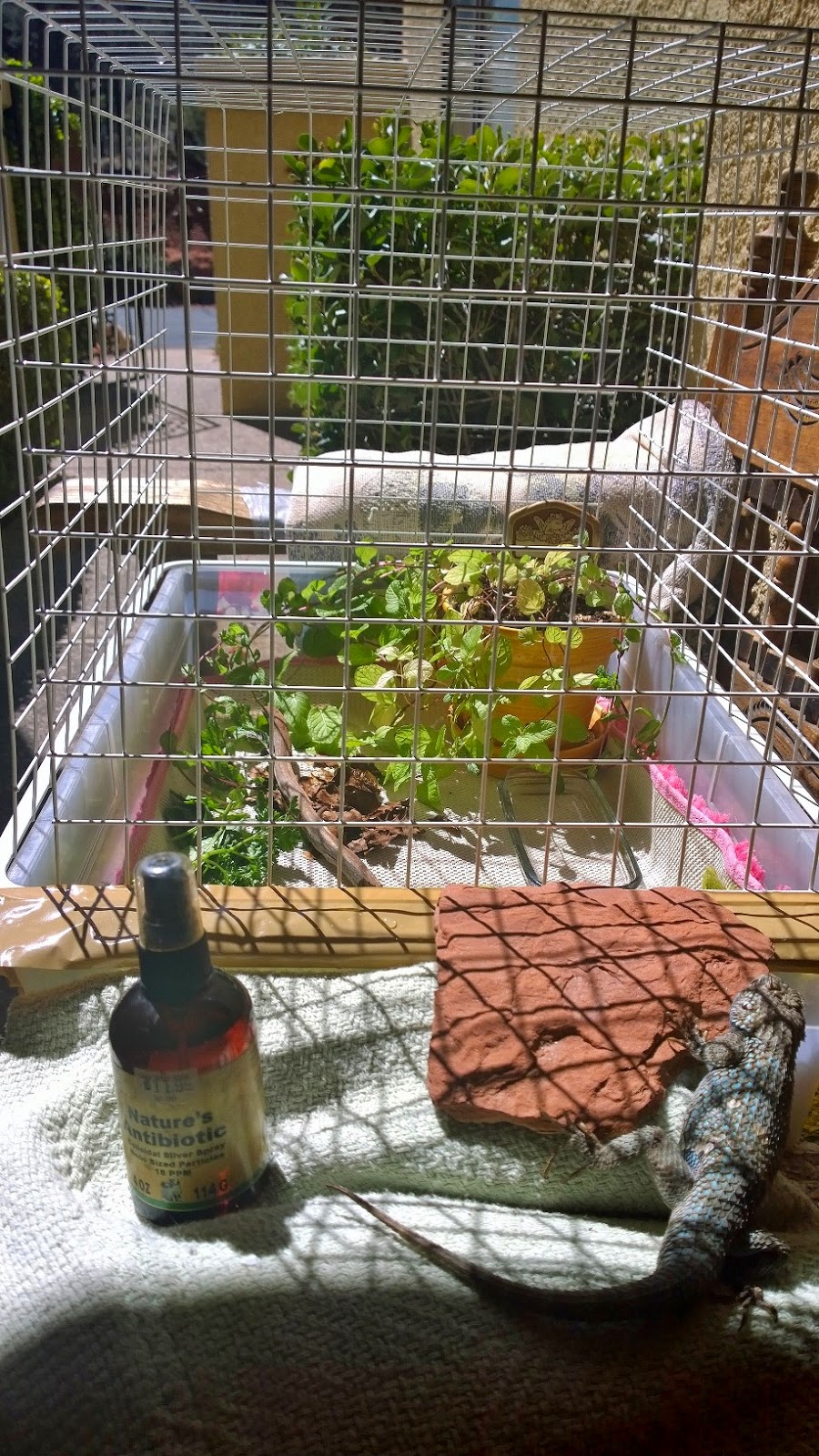 She would spray him from time to time with "Nature's Antibiotic", a natural immune fighter. She figured it couldn't hurt. She was concerned that it had been over a week since he showed up and he hadn't had anything at all to eat.

The next day she went to PetSmart. She wanted to find food that he would want to eat. They suggested crickets. She cringed. She loved every creature on the earth and she didn't want to buy the crickets just to be preyed upon, but then she figured that this was their destiny anyway. So she bought 20 of them and she bought some mealy worms too. Then she bought an aquarium--not to contain Mr. Lizard, but to contain the crickets and the worms so that he could eat them.

She would put Lizard in the sun all morning and then she would put him into his Cafe Aquarium for the afternoon. 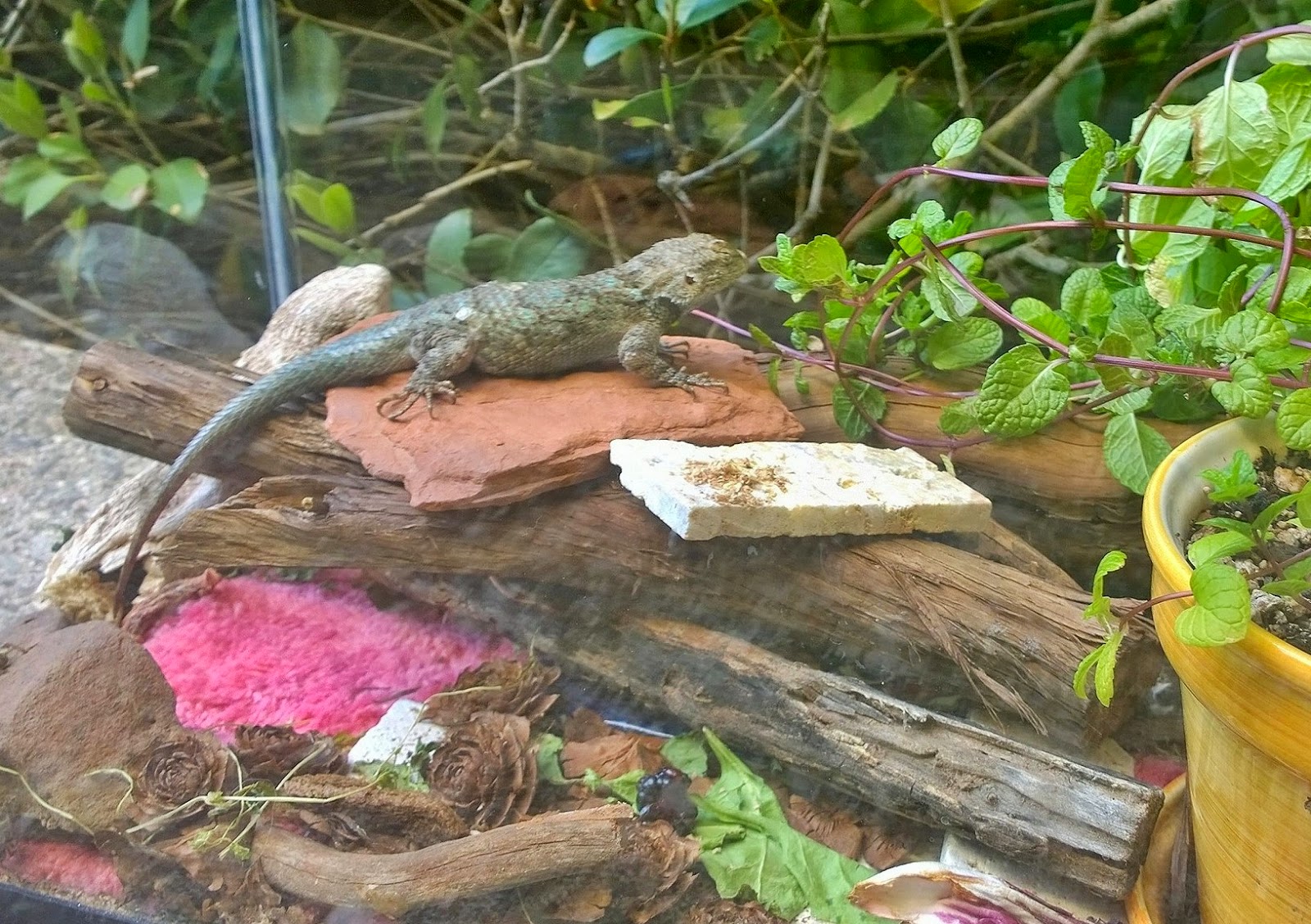 It seemed quite a good set up.  Rocks and branches and crickets and worms and herbs and carrots and spinach and a little tray full of water. 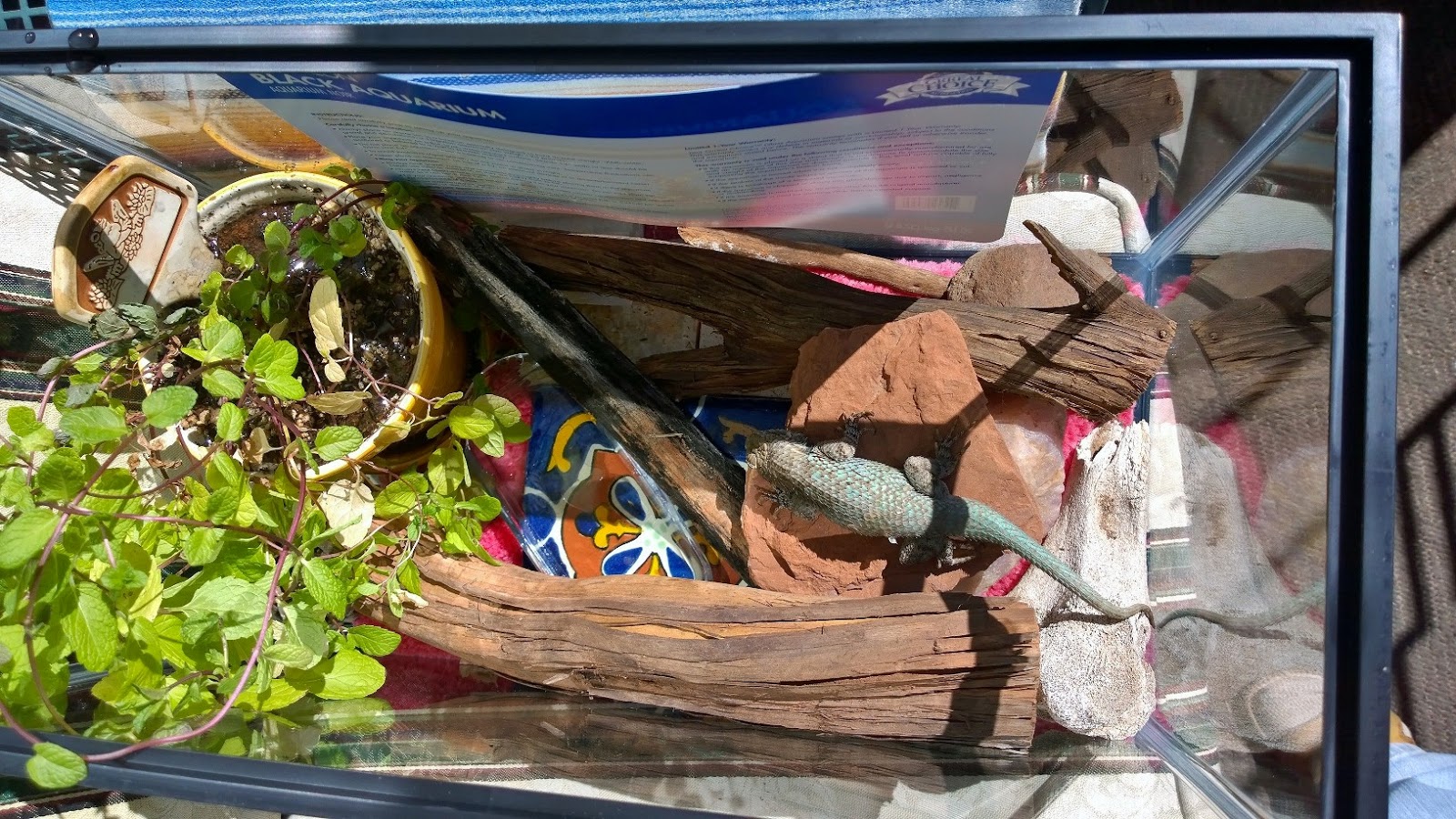 He spent all day one day laying in the tray of water.  Meanwhile the crickets walked all over him -- around his mouth and head. His eyes were still closed. The worms creeped alongside him. He paid no attention to any of them. 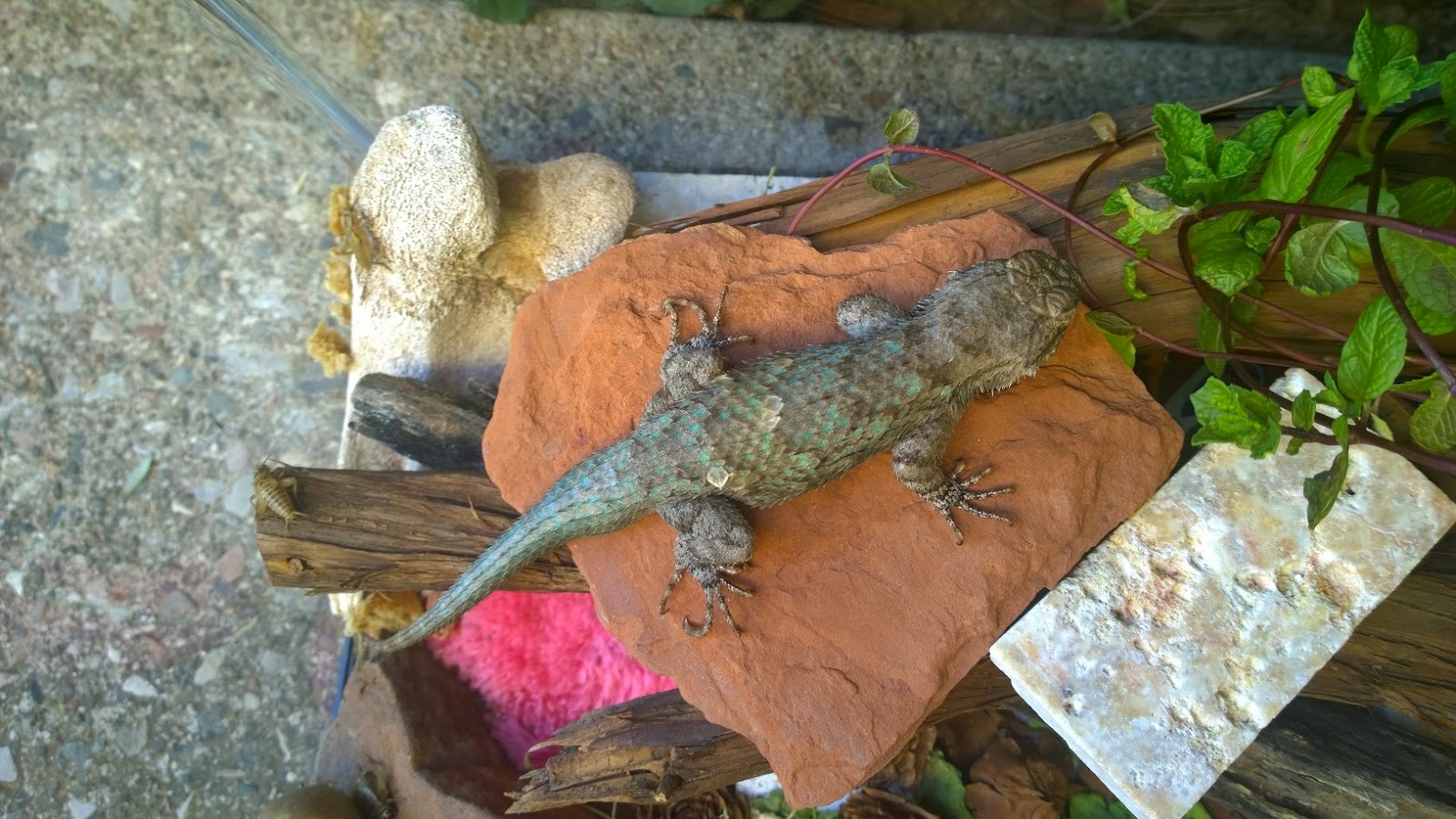 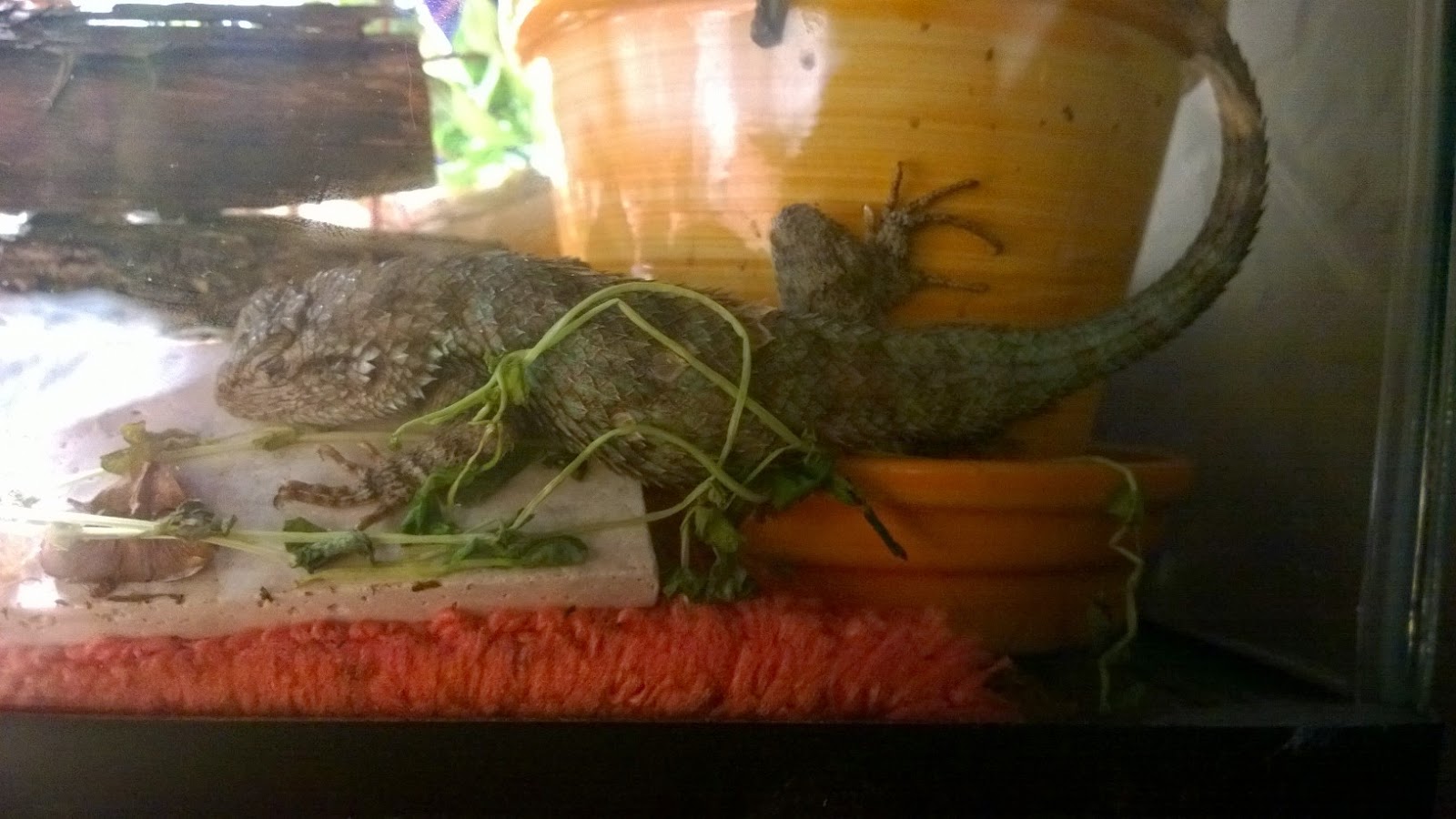 The worms ate the carrots and then the crickets started eating the worms. 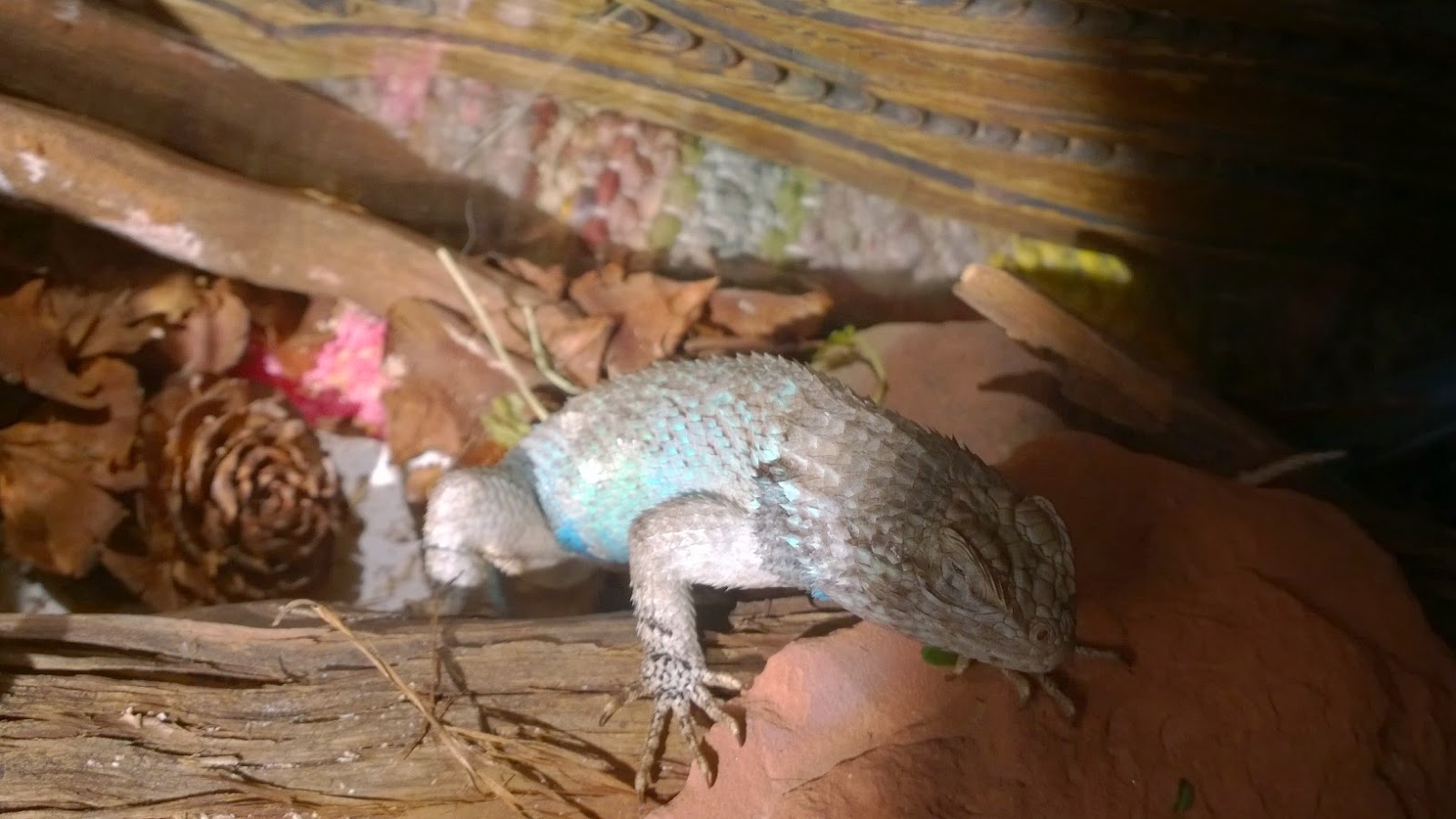 He didn't seem to be benefitting from the "restaurant".  She bought canned crickets and mushed them up in water and fed him with an eye dropper. He took a little bit of them but not much. 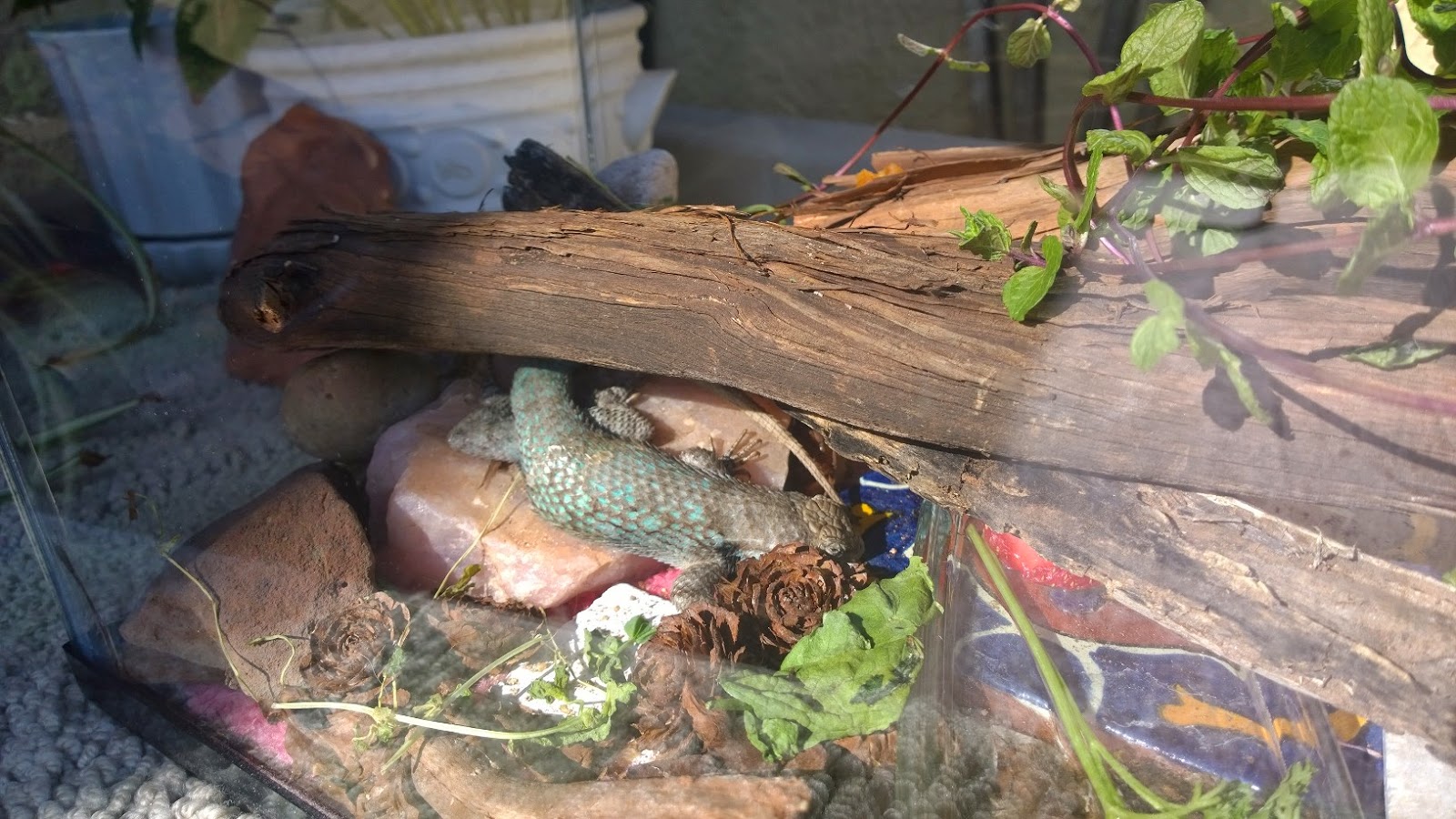 When she bought the canned crickets she was told "Be careful because they will start eating him if he isn't active and if he doesn't eat them."

This aquarium "restaurant" idea wasn't working out too well.
Posted by Unknown at 11:48 AM