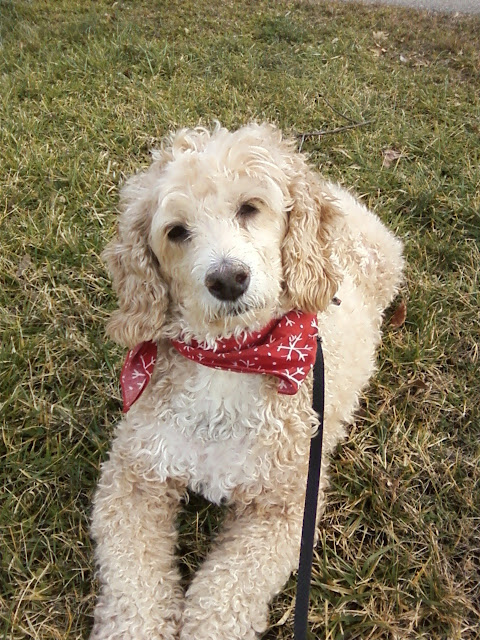 It is often said that sometimes things come in three's. I have witnessed that to happen, but did not pay that close of attention to it until I realized it has happened to me. As I reflect back to 15 years ago, it is hard to believe that it has been that long since we welcomed our first dog into our home. I grew up with them off and on, but did not have much of an interest in having one of my own. Fast forward to 2001 when our son was 12 and we had already been married for 20 years.

I will always remember when we told him that we were "just going to look." Ha! Not only did we bring home an 8 week old, five pound bundle of fur, we brought home something that we had no idea could bring us so much joy and love for almost 15 years.

Wrigley, you defined love. Pure and simple. There will NEVER be another you. You taught our family more than I can ever express to anyone. Your sweet disposition was infectious. The fun we had with you, the laughs you gave us, and the joy you brought to our lives cannot be measured in words.

Your last couple of years were a challenge, as you battled seizures,Cushing's disease, and a myriad of other issues. But you refused to give up. You fought some very big battles being the warrior that you were. But in May, I knew you were getting tired and that's when we had to face the hardest decision of our lives. We did not want to let you cross. Your eyes were what told us. You were ready and as you passed in my arms, it was the hardest day of my life. My heart will never be the same.

The house was too quiet. I did not want to go through that pain again, but God knew better. He knew our hearts. We decided to rescue this time. Dexter was your twin, Wrigley. But the difference was he was 9 and had a hard hard life. We were going turn that around for how ever many years he had left. We fell hard. I was thinking he would feel right at home....right away. How was I to know it would not be so quick? For 30 hours he did not move off of the couch, did not eat or drink and cowered as we approached him, even as lovingly as we did.
I finally got him to go for a walk at midnight. It had stormed that night and he clearly was apprehensive of our walk, sitting down every few steps as if he was asking permission. We were so ready to love him and teach him that our love for him would be as unconditional as his would be for us. I came back into the garage and as I praised him and unleashed him, he bolted. He grew wings as he ran, and I did not have those same wings to catch him. We searched but it was an unusually black night and it was as though he disappeared. He was found the next morning less than a quarter of a mile from home. He had been killed by a car. If only he would have trusted us. But why should he have? No one ever had given him reason to trust so he took the opportunity to run, and run he did. The wound was ripped right open again. The guilt has not left me.

It was right after that I saw Jack's book offer on FB. I read it in almost one sitting and literally soaked paper towels as I read. What an incredible couple of hours that was. It touched me more than any dog book I have ever read and I read ALOT. Wow wow wow is almost all I could say in my review on Amazon. What an incredible way to tell a story full of so much love and wisdom, that it's almost palatable. What a find!!!! Coincidence? Fate? Luck?

Well, shortly after that I got a message that a friend of mine's sister runs a pet store and had a customer looking for a home for her daughter's dog. She could not care for her any more. She wasn't good with children (as they teased her) and she needed an adult home. Would I be interested? I did not give myself time to think about it and I know that Wrigley and Dexter had a hand in this.

We welcomed her into our home in mid September and have never looked back. A white fluff ball whom we affectionally renamed "Kate." Our first and only "daughter" and little sister to our boys. I have to think that we have to crawl before we walk, that God promises a safe landing, but not always a calm passage. We are loving her more and more every day. Is it with the intensity that we did for Wrigley? No, and it may never be. Those are big "paws" to fill, but we don't expect her to fill them. They are too big for her and she doesn't have to for us anyway.

So as we begin to heal, we want to believe that Kate was brought into our lives to help us do just that. She sure has her own little personality and sweetness about her. One thing we do know is that Wrigley taught us more about life than most people can even begin to teach us. He knows we have plenty of room in our hearts and so many more of his brothers and sisters need loving homes for the rest of their days.....no matter how limited those may be.

We hope and pray that this "third," as it has come in threes, is with us for many years to come. We do this in honor of our boys, never in place of them.

Thank you to both Kate's (yes, she was named after our one and only!) for showing us that we can open our hearts and love again. There is no reason not to.

Oh Laurie, I have tears as I read your story for Kate's book and Jack are to me my lifeline. I need them both and my path to releasing pain and growing comes into my heart and is released by eyes on those soggy paper towels. My nose runs profusely too. Thank you for your beautiful love story.