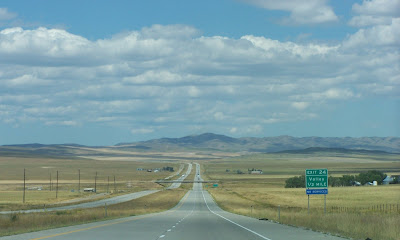 There's nothing like simple wide open spaces to put things in perspective.

What should have been a 10 hour trip turned into almost 14. A five car pile up on the 2-lane highway in Salt Lake started the day. (We considered ourselves lucky, though, we weren't involved!)
We hit Boise at rush hour! And then almost 200 miles of construction and darkness -- with "steep drop off"s on the right and new curbing on the left - no lines painted yet on the road and our car in the lead to light the way for the line of traffic behind us! It was a dark and tiring 200 miles but Kate and I got into Bend safely -- albeit several hours later than planned.

The camera battery died early so there are no photos of Oregon posted here. The prettiest leg of the journey started about an hour over the Oregon border. Not a sign of mankind anywhere except the highway itself running through God's Country. An occasional ranch along the river, whose water meandered along the highway for most of the trip into Central Oregon. 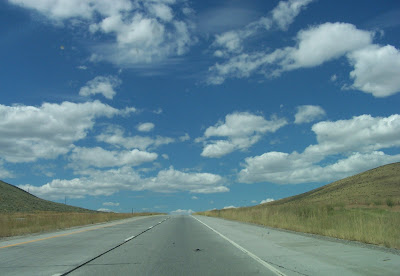 This seems like an optical illusion to me somehow.... But it's very real!
It was somewhere in Idaho, I think.
Posted by Unknown at 8:20 PM